With this feature, users are now able to take the previously manual process of importing data and automate it. Any data capable of being imported can now be handled using our API. With a little help from your internal IT team, you can now set up a recurring feed to pass a file (xls, xlsx, or csv formats) to Catalyst for import, using all the same settings currently available (create new, update existing, etc). Follow the instructions below to get started.

Before you can set up an automatic import, you will need two pieces of information; an Access Token and an Import ID. You can get your Access Token by following the Getting the Access Token section of the Catalyst API article.

The next thing you will need is an Import ID. If you have never imported the information you are mapping with API Import, you will first need to do a manual import (this will be used later to tell the API what to do with the file you send). For directions on how to set up a manual import please see our Importing article.

Once you have a completed manual import for the section you wish to update, you will need to obtain the Import ID from it. Follow these steps to obtain the ID. 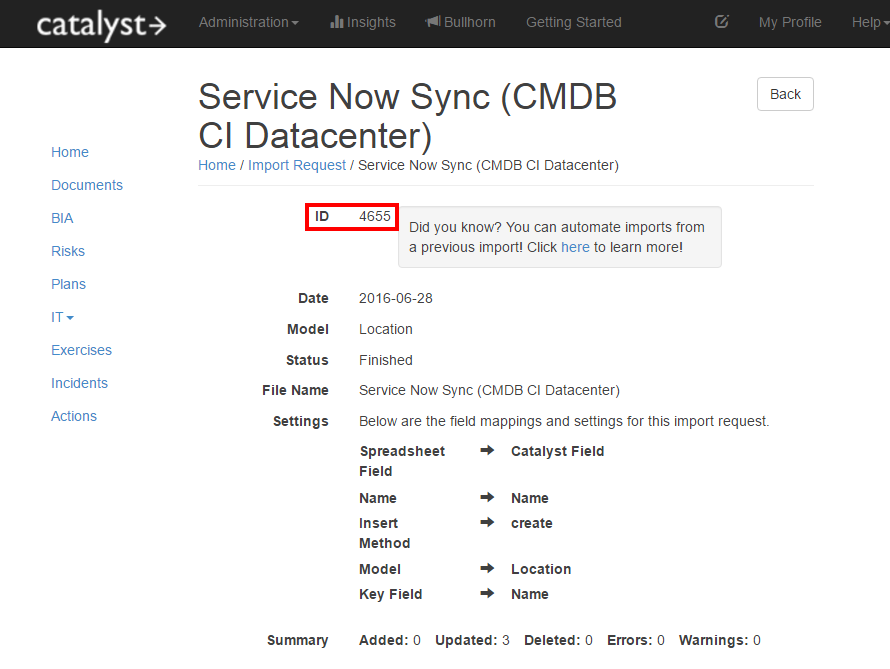 You will need a different Import ID for each different module you are importing through API (one for Internal Contacts, a different one for Applications, etc.)

The last step is to create an API call to Catalyst with the relevant import information (see below). API calls can be written in many different languages (AJAX, Ruby, etc.). For this part, you’ll likely need the help of your IT department.

Files used for API imports must have the same column header names as the file used for the manual import. Having different names will cause issues that could result in the loss of data.

Have more questions? Submit a request